NOT THIS TIME! is a grassroots movement that evolved from the killing of Mr. Che' Andre Taylor by the Seattle Police Department on February 21, 2016. 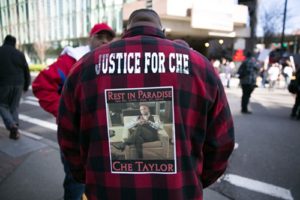 Andre Taylor (Che's brother) and his wife Dove founded Not This Time shortly after Che's death, to engage with local community members, the families of those who have lost their loved ones to police shootings, and those who work inside the system, to demand more police accountability and safer communities.

Not This Time works with a large and diverse coalition of Native Tribes, Black Churches, Asian Pacific Islander groups, Latino Organizations, and people with disabilities to reform policing in Washington State. It has garnered the support of U.S. Senator Patty Murray, U.S. Congressman Adam Smith, and many others working to create more just laws in Seattle, King County, and Washington State. Organizational allies include the Seattle Community Police Commission, the Black Law Enforcement Association of Washington, the King County Office of Law Enforcement Oversight, and the Washington Joint Task Force on the Deadly Use of Force in Community Policing. 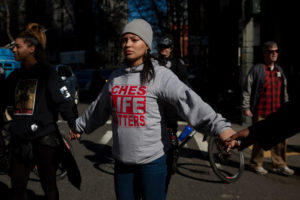 The communities we serve, especially African-American, are disproportionately affected by fatal police shootings.  In the decade from 2005 and 2014, over 200 people were killed by the police in Washington State.  The exact number killed is not known, because Washington State, like almost all other states in the US, does not maintain an official statewide record of officer involved shootings.  The estimate here is taken from a Seattle Times investigation published in 2015.  That investigation revealed deep racial disparities in the use of deadly force:  in King County, African-Americans make up only 6 percent of the population, but more than 20 percent of the citizens killed by police.

Many of these uses of deadly force were deemed unjustified by both community groups and the police departments themselves. Yet, as the Times investigation put it, here in Washington State, officers were effectively "shielded by the law" from prosecution.  Until voters passed 1940 in 2018, our state had the most regressive law in the country with respect to holding police accountable for the unjustified use of deadly force.  Unjustified killing is murder, and no one who commits murder should be shielded by the law. Our communities feel that justice has been denied.

Not This Time has been engaging elected leaders, prosecutors, community leaders, communities of color, and the public at large in addressing these issue and  creating a safe place for dialogue and reconciliation. We seek to empower communities that have been less active in civic affairs to get involved. Because of our leadership and reach, many underrepresented individuals have spoken face-to-face with elected officials (often for the first time). The Seattle Mayor, King County Prosecutor, and Congressman from the 9th district (among others) have attended our meetings.  Through outreach, engagement, education and dialogue we seek to increase awareness and help fill the gaps in voter participation.